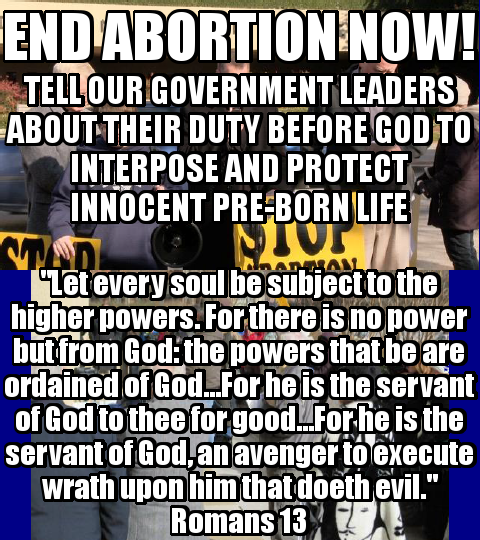 Pro-life groups in Huntsville will meet in front of the Madison County Courthouse on Friday, January 15 at noon. The 17th Annual North Alabama Stand for Life rally is held to commemorate the 58 million babies aborted in America since the Roe v. Wade decision on January 22, 1973. The rally will last approximately one hour. Be prepared for the cold weather.

Representatives of several pro-life and pro-family groups will speak on why abortion violates scripture and hurts families. You will also hear from pro-life leaders in the political realm of how we can stop the mass murder of innocent children occurring at the abortion clinic in Huntsville. Pro-life pastors will also speak on why according to scripture the church must rise up to defeat the evil of abortion.

Undercover videos released this summer by the Center for Medical Progress show Planned Parenthood executives haggling over the price of aborted baby body parts. Some even reveal Planned Parenthood techs rummaging through the actual dismembered pieces of unborn children to identify body parts that can be sold. Because of the widespread exposure of the heinous practices of the abortion industry we need to seize this opportunity to pass legislation in Alabama to end abortion. You will hear about proposed pro-life legislation in the Alabama Legislature and what you can do to help it pass.

Other action steps to end abortion:

1. Contact the local police department and sheriff and ask them to arrest the clinic doctors for murder and to open an investigation into the clinic.

2. Contact your state representative and senator and ask them to support pro-life legislation during the next session to end abortion in Alabama.

3. Contact the mayor and your city councilmen about supporting ordinances to close the clinics through zoning ordinances and other means.

4. Contact the Alabama Department of Health and ask them to revoke the licenses for abortion clinics.

5. Contact your pastor. Encourage him to preach a sermon on the evils of abortion and the need for Christians to defend the lives of innocent babies. Ask him to personally visit with elected officials about the need to end abortion in Alabama.

Please tell your church and your friends about these events and ways that through God’s power we can end abortion in Alabama.